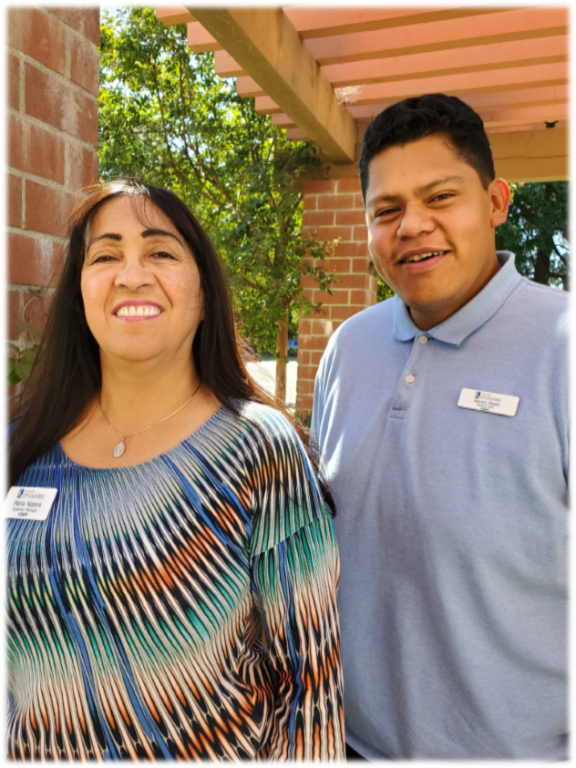 Maria E. Natera is the new Business Manager.  Maria was born in Los Angeles, California and at the early age of five, together with her parents, one older sibling, and one on its way, moved all the way to South America to live in Caracas, Venezuela.  “Growing up in Venezuela was like living in California,” Maria states.  “Caracas had nice weather, beautiful beaches, high rise buildings, and lots of traffic.  The only difference then was that they spoke Spanish at school and English at home.”  Maria lived in Venezuela until 1989 when she moved back to her roots in southern California.  She continued her career in Business Administration, working many years in the entertainment and telecommunications industries, and for the last 14 years, Maria worked for the Archdiocese at two different parishes.  Maria is the proud mom to one son, Paul Alexander, and grandma to two beautiful granddaughters.  Tim and Maria live in Northridge and are happy to be at Our Lady of Lourdes.

Ramon Jesus Reyes is our new Pastoral Intern.  Ramon was born and raised in West Adams, Los Angeles which is just a couple of miles from Culver City.  As the youngest of four children Ramon’s Mexican-American family sought to express Catholic values throughout their daily life.  Ramon attended Saint Agatha Parish School for a couple of years and gained great respect for religious education.  Through his adolescence he enrolled in both public and charter schools, while later in life Ramon received a Bachelors Degree in Business Administration.

During Ramon’s childhood, he was that kid who had too many questions and received so few answers.  Ramon started his discernment to the priesthood by seeking to understand what makes him that special child of God.  He entered the journey like everyone else in our world, seeking happiness and true fulfillment.

After watching the movie, “The Passion of the Christ,” at 17 years of age, the idea of becoming a priest came to Ramon.  “Why did Jesus die for me?”  This question came to his mind and Ramon’s response was LOVE.  “If He died for me and the whole world for love, then I wanted to give my life for Him and his people.  If He came to serve then I want to serve, if He was the way to salvation then I want to walk that journey with my fellow brothers and sisters to Him.”

During his early twenties, Ramon attended Saint Thomas the Apostle in Los Angeles.  There were over ten thousand families and over eight Sunday masses. This community was a beacon of light in the middle of a dark city.  The love of serving and walking hand in hand with fellow Catholics gave Ramon a heart of Christ.  He learned to love beyond himself, to give his time, resources, and efforts for the wellbeing of his neighbor.  Seeing the need of being the bridge for others is what gave Ramon the sign to seek deeper into what God has planned for him.  That desire grew in pursuing a vocation into the priesthood.

As the Lord tells us in the Gospel of Matthew, “the kingdom of heaven is like a treasure buried in a field, which a person finds and hides again and out of joy goes and sells all that he has and buys that field.”  For this reason only, Ramon has found the most valuable thing in the whole world, God’s unconditional love.  In this joyful life that he has chosen by God’s grace, he will find true peaceful happiness.

There are no comments yet - be the first one to comment: